In this final report in a three-part investigation into the controversial sale by France to India of 36 Rafale fighter aircraft, Mediapart reveals, with hitherto unpublished documents, how an influential Indian business intermediary was secretly paid millions of euros by Rafale manufacturer Dassault Aviation and French defence electronics firm Thales. They succeeded in removing anti-corruption clauses from the fighter contract which was subsequently signed by then French defence minister, now foreign minister, Jean-Yves Le Drian. Yann Philippin reports.

It was on March 26th 2019 in New Delhi when officers from India’s Enforcement Directorate, a government agency tasked with fighting economic crime and money laundering, arrested Sushen Gupta, an influential intermediary in arms deals. After spending two months in preventive detention, he was charged with “money laundering” and released on bail.

The charge related to a vast corruption scandal which first erupted in 2013, dubbed “Choppergate”, which centred on a 550-million-euro contract for the sale to India of helicopters manufactured by the Italian-British firm AgustaWestland. While several individuals cited in the case were eventually cleared of wrongdoing by the Italian justice system, in India the investigations are continuing.

Gupta and other intermediaries were paid, using inflated invoices for what were termed as “software consultancy” contracts, more than 50 million euros in commissions by AgustaWestland through offshore companies. According to the criminal complaint filed against Gupta, who denies wrongdoing, the Enforcement Directorate  (ED) suspects that part of the money was paid as bribes “to politicians, bureaucrats and government functionaries”.

In their investigations into the routes of the secret funds, the ED discovered that Gupta also “received kickbacks” in order to influence the result of “other defence deals”. The money was found to have transited through the same shell companies and the same types of “software consultancy” contracts used in the helicopter deal. 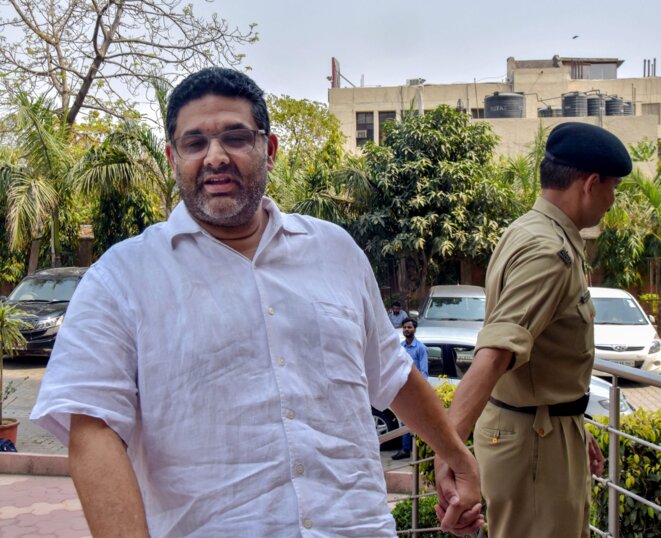 According to information gained by Mediapart, one of those “other defence deals”, which is not identified in the charge sheet, is the inter-governmental agreement signed in 2016 for the 7.8-billion-euro sale by France to India of 36 Rafale fighter aircraft, built by Dassault Aviation.

In the official charge sheet dated May 20th 2019 against Sushen Gupta, the ED wrote that “since kickbacks from the other defence deals are not a subject matter of the present investigation” about the AgustaWestland scandal, “separate investigations would be undertaken” regarding the other deals.

Already in 2019, Indian investigative news website Cobrapost, and followed later by Indian daily The Economic Times, revealed the contents of documents demonstrating links between Dassault, Sushen Gupta and the sale of the Rafale fighter jets.

Yet two years later, there remained no visible evidence that the ED had opened an investigation focused on the Rafale deal. Contacted by Mediapart, the agency did not comment on whether such a probe had been launched. 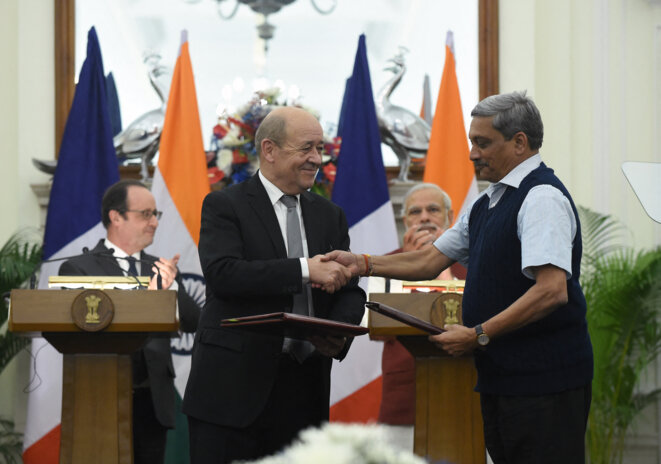 Which raises the question as to whether the suspicions of corruption surrounding the Rafale contract had been buried by the investigative authorities in India, as was the case in France (see more on this in the first and second part of Mediapart’s “Rafale Papers” investigations here and here ). What is certain is that the affair has become highly sensitive given that serious questions are raised about the involvement in the deal of a close acquaintance of ultra-nationalist Indian Prime Minister Narendra Modi (see more here)

Meanwhile, thanks to witness statements, the results of searches of premises and international judicial assistance, the ED has gathered a mass of evidence concerning Sushen Gupta, including computer files, email correspondence, banking details, agendas and other handwritten documents.

Mediapart has obtained a number of confidential documents from the ED’s case file, which shed new light on the behind-the-scenes events of the Rafale deal.

The first two reports in this three-part investigation have stirred public opinion in India over recent days, and Mediapart’s revelations here are likely to heighten the controversy.

According to documents obtained by Mediapart, Dassault and its French industrial partner Thales – a defence electronics firm in which Dassault and the French state are the major shareholders – paid Sushen Gupta several million euros in secret commissions to offshore accounts and shell companies, using inflated invoices for software consulting. These payments were on top of a questionable contract with Dassault for making replica models of Rafale jets, worth 1 million euros, which was revealed in the first of this series of reports.

As middleman for Dassault and Thales, Sushen Gupta, amid the discussions over the Rafale deal in 2015, obtained confidential documents from India’s defence ministry relating to the activities of the negotiating team. The Enforcement Directorate, in its official charge sheet against him, wrote that Gupta had gained “sensitive data which should have only been in possession of the Ministry of Defence”.

It is not clear how Sushen Gupta, who did not respond to Mediapart’s attempts to interview him, managed to obtain the information. Three years earlier, in a note from his archives dated September 7th 2012, and which appeared to be addressed to Dassault, he warned: “Cannot stop now too late for me, I owe people money and commitments. […] People sitting in office asking for money. […] Those people will, if we don’t pay, put us in jail and […] then we are really finished, deal scrapped.”

The evidence found by the Indian investigators may help to understand why Dassault and France-based European missile manufacturer MBDA, which was also a party to the Rafale deal, worked hard to remove anti-corruption clauses in the inter-governmental agreement for the jets, which was negotiated and signed by Jean-Yves Le Drian, who was then France’s defence minister during the presidency of François Hollande, and who is now foreign affairs minister under President Emmanuel Macron. 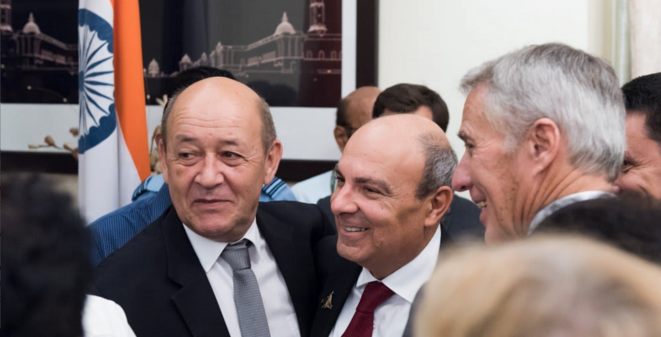 Those anti-corruption clauses could have had costly consequences for the industrialists, for they allow for India to rip up the contract and/or to demand compensation not only if acts of corruption are discovered, but also if the seller paid an agent in order to “intercede, facilitate or in any way to recommend [the seller] to the Government of India or any of its functionaries”.

India’s defence ministry was required, under the terms of the country’s “Defence procurement procedure” to include the clauses in question – “penalty for use of undue influence” and “agents/agency commission” – into the contract. But the French “Team Rafale” wanted them excluded. 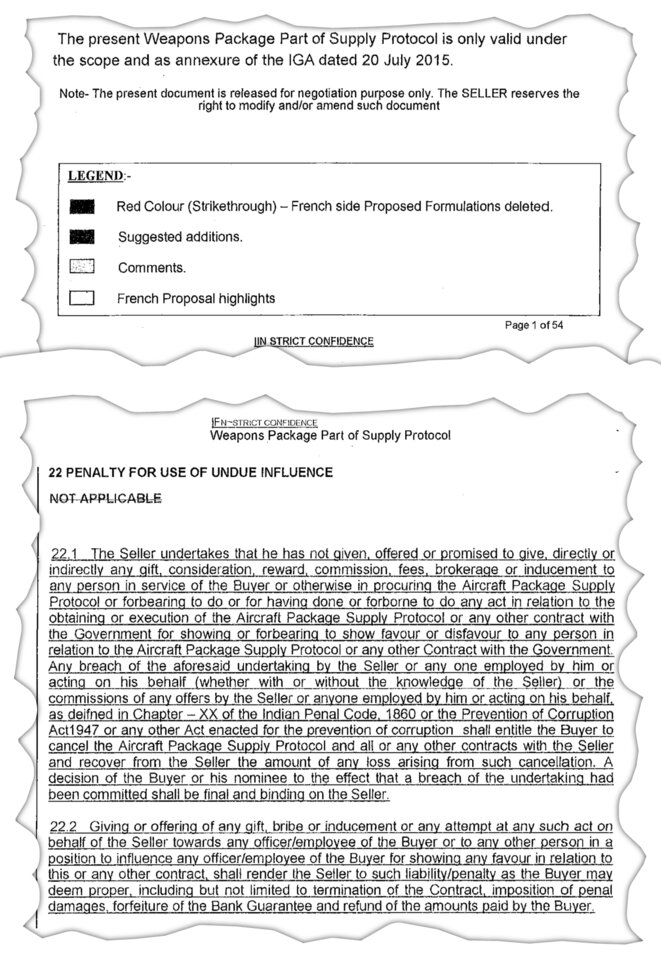 Six months later, in the contract proposed on January 13th 2016 by the French team, concerning Dassault’s supply of the aircrafts, the two anti-corruption clauses were again marked “Not Applicable” (see document below). 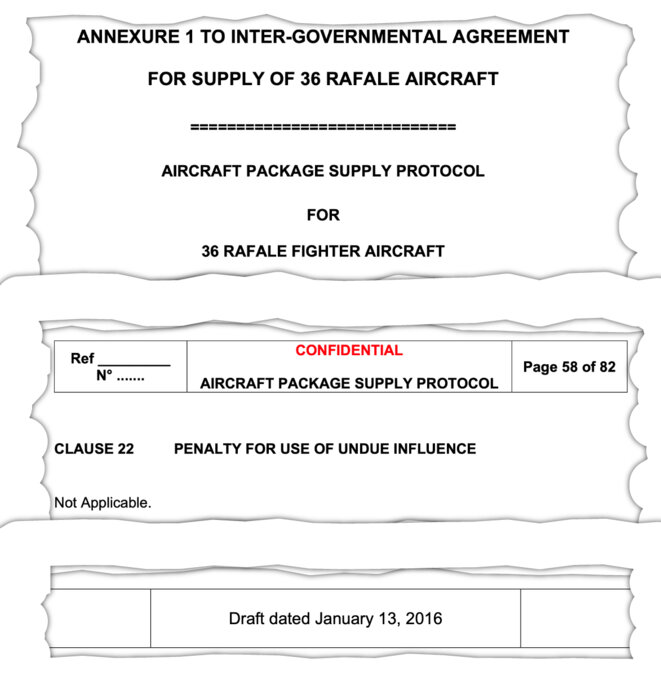 According to a report in The Hindu, the Indian authorities finally approved the removal of the clauses in September 2016, just before the signing of the final contract, at a meeting presided by the Indian defence minister, Manohar Parrikar.

Did his French counterpart, Jean-Yves Le Drian, also approve the removal of the anti-corruption clauses? Was he informed of the move? “In no case do we validate the information that you refer to,” commented a spokesperson for Le Drian, now French foreign affairs minister, adding that, “the inter-governmental agreement […] concerned only the requirements of the French government to ensure the delivery and quality” of the Rafale jets.

However, in the case of a sale agreed between two governments, the contracts are legally adjoined to the inter-governmental agreement. The heart of the negotiations was led, on the French side, under the direct authority of then defence minister Jean-Yves Le Drian, by a team of 11 people, made up of eight senior members of the French weapons procurement and export agency (the DGA) and the French air force, along with two representatives of Dassault and one for the MBDA.

Questioned by Mediapart, the MBDA replied: “MBDA does not habitually comment on negotiations concerning contracts.” Also contacted, Dassault declined to comment, as it has also declined to respond to all the issues raised in this report.

François Hollande, who was French president at the time of the events (in office from May 2012-May 2017), told Mediapart that he was “at no moment informed of these aspects of the negotiation”, and that he therefore could “not have approved an eventual removal of these [anti-corruption] clauses”.

Mediapart sent detailed questions to all those involved in the issues raised in this report.

Indian business intermediary Sushen Gupta, who was contacted by email, and re-contacted on several occasions, did not respond to Mediapart’s request for an interview.

The spokesperson for Jean-Yves Le Drian, now French foreign minister and who at the time of the events evoked here was France’s defence minister, sent Mediapart a brief written reply (which can be found in full, translated from French into English, here, or by clicking on the ‘More’ tab at the top of this page). The French armed forces ministry (the now renamed defence ministry), told Mediapart that it had “no additional commentary to add” to that provided by the foreign affairs ministry.

France’s former president François Hollande, in office over the period of the negotiations and signing of the Rafale deal, replied to Mediapart’s questions by mobile phone text messaging.

India’s agency for investigating and prosecuting economic crimes, and notably money laundering, the Enforcement Directorate, confirmed reception of Mediapart’s questions submitted to it but did not respond to them. Similarly, the Indian defence ministry press secretary acknowledged receiving Mediapart’s questions submitted to it, but no response followed.

Contacted by email, the Indian company IDS did not respond to Mediapart’s questions.